The Gazette (ガゼット Gazetto?, stylized as the GazettE) is a Japanese visual kei rock band formed in early 2002.[1] The band is currently signed to Sony Music Japan's VVV Records. In addition to being one of the more popular bands in the visual kei scene, The Gazette has gained a large international following and to some degree managed to break into the mainstream Japanese music industry
_________________
Living on a dream
Dying for an angel
Reach out, waiting for a miracle
No sign of wings, as you turn your back on me 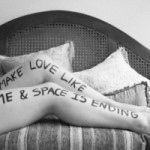